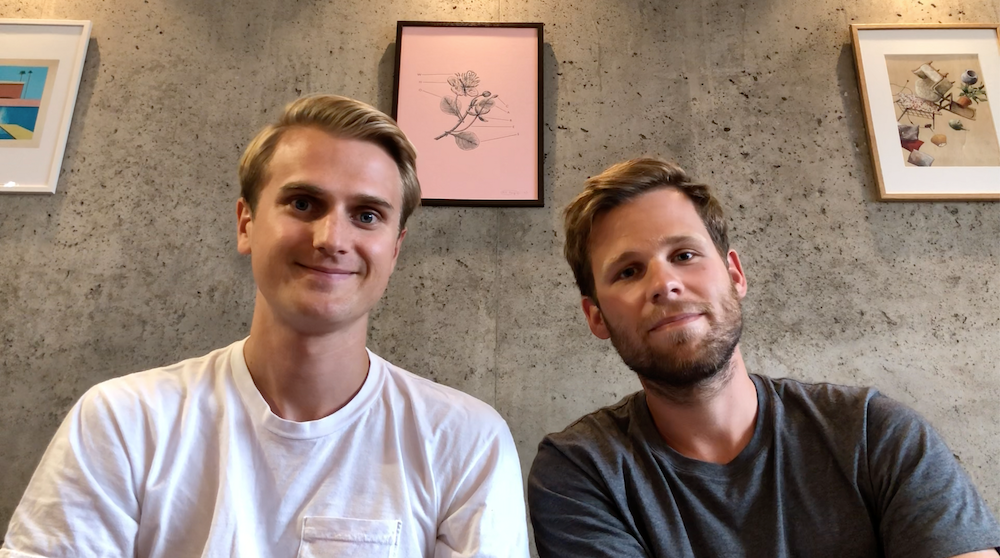 The hard knock life of Dune Analytics’ early days. Three years ago today we founded the company out of Oslo, Norway. It’s been a bit of a ride so I wanted to tell the story of the early days of Dune.

The hard knock life of Dune Analytics’ early days. Three years ago today 1st of September 2018 Mats and I founded Dune Analytics out of Oslo, Norway. It’s been a bit of a ride so I wanted to tell the story of the early days of Dune.

In the spring of 2018 Mats and I tinkered with building smart contracts at our corporate employer. We had discussed the idea of starting a crypto company for some time. Specifically, we knew it was hard to get access to the smart contract data and analyse it, so we discussed that as an opportunity. During one of those discussions over a beer that summer Mats told me “I quit my job yesterday”. It then took me about half a second to realise I would have to do the same.

This was pre Uniswap, there were maybe a handful of smart contract products live and Etherscan would show basically only ETH transfers. We figured there’s emerging a new financial system we deeply believe in, a ton of folks are gonna build on it and they are going to need to understand what’s happening in their products. So we founded Dune Analytics.

We knew practically no-one in the space, had no potential clients in Norway and crypto had firmly crashed and sobered up after the 2017 hype. After having worked on Dune for about a week we realised that ETH Berlin was where everybody was at! However, we had no tickets or ways to get in, the event was a few days out and was very much sold out. We also had a grand total of $2 500 in the company bank account: the minimal amount required to start a company in Norway.

However, two days before the event I saw that Jack from Colony tweeted he had two extra tickets. We had actually briefly been in touch with him during some early user research so I emailed him right away, and boooom we got the tickets! We hopped on a plane the day after and spent $1 000 on last minute flights and hotels.

We were incredibly excited and star struck by being in Berlin. We were hanging out in the backyard of the amazing Factory Gorlitzer venue and thinking damn there’s the 0x team, there’s Kyber, there's Aragon and so many more of the teams building the coolest products in the space.

I remember walking up to this big and intimidating investor named Kyle Samani and pitching our idea. He said something like “at this point I believe there’s no business to be made in crypto data”. I remember being a little put off by the bluntness but appreciated his frank answer and assumed Multicoin Capital would never fund us then. We were both wrong, eventually.

At this point we were running around pitching hand drawn charts and ideas for dashboards, and had no product. Hot off the Berlin trip we kept building and trying to stay in touch with all the folks we met there.

The OG Dune dashboard. The 1/1 NFT can be bought here - on auction until Sept 7th.

We decided to go to ETH SF in October. The only problem is SF is expensive AF and on the other side of the world, while we had $1 500. Mats and I shared the cheapest/shittiest hotel we could find and went for it. I’m a heavy snorer so sharing rooms pretty much meant 50% lost sleep for Mats, thanks for bearing with me!

In SF we caught up with Nadav at Dharma which we had briefly met in Berlin. They came through and said they would be happy to be our first customer. Hurray, paying customer! Achievement unlocked! We were rolling! We went home and worked our ass off to ship clean Ethereum data to Dharma.

We’re now 3 months in and have our first customer: ready to fundraise! Practically no-one in crypto had any revenue at the time so we were convinced that with a good brand like Dharma as customers we should be able to raise a few hundred thousand in no time. Boy were we wrong!

Fundraising was absolutely brutal. No traditional VCs cared about crypto and the crypto VC were few and far in-between, and seldom deployed much capital those days. Being two random ass founders with no track record based in Norway did not make it easier. Beyond the sheer amount of no-replies and ghosting we got, the feedback was that the market was too small, the data is too open, this crypto thing is too early if it even happens at all.

When we started Dune we had saved up for facing a couple of months without a salary. By Christmas it was clear that fundraising would not come easy and that seemingly no investor believed in what we were doing. I remember going into that Christmas holiday with a deep uncertainty about what was next. We did not know if or when we would get a salary, or if we could keep doing this.

Right after we went to SF we got a Norwegian government innovation grant of $10k. That was all the money we had for over half a year. It paid for flights and accommodation to ETH Berlin, ETH SF, Devcon Prague, another Berlin trip and ETH Denver. No fancy hotels, always shared rooms, no extra leg space across the Atlantic.

In Denver in February 2019 we sat in a cafe and talked about what we would do when we came back home to Norway. It looked like this might be our final trip as Dune. Mats was broke, I was too and we couldn’t afford another month without a salary. We had some traction but no money. We would probably have to do something else, this crypto analytics thing was not working out.

However, after 7 months of grinding we finally had some luck and found some believers! At ETH Denver we ended up meeting Teck and Flora from Binance Labs that got really impressed by us actually having paying customers. Soon after they accepted us to the Binance Accelerator and funded us with a $250k pre-seed. In April 2019 we finally got our very first Dune paycheck: the sweetest $4 000 payroll we’ve ever had!

One of the things I remember Teck told us was: “Nothing is linear. As a startup you can hustle for a long time, and nothing happens and then suddenly when things happen they happen so incredibly fast.” That stuck with me, and is exactly what our experience and journey has been like.

For over two years we kept grinding as a two person team with a limited salary and budget - even after we got our first funding. Then finally after pushing through all the hardship of that, for the last year things have really really taken off. We’ve scaled from 2 to 17 people (and hiring many more). We did our whole Series A process in one week. From an already strong July month we grew key metrics by 175% in August! And so on and so on.

Now we are full speed ahead, hiring and investing heavily across the board with a huge vision of making crypto data accessible. Going hard now is absolutely the right thing to do and incredibly exciting, but being severely resource constrained will always be with me. Having no money was brutal but also forced us to think hard on our decisions and priorities. In the crypto world right now money ain’t a thang in the Jay-Z sense, but I’ll never forget what it was like in the early days of Dune sense. Hard knock life might come again, and we’ll manage that as well.

PS The article photo is from a video pitch for one of the several accelerator we didn't get accepted to.

PPS We are hiring big time across ~Europe time zones, and frankly. 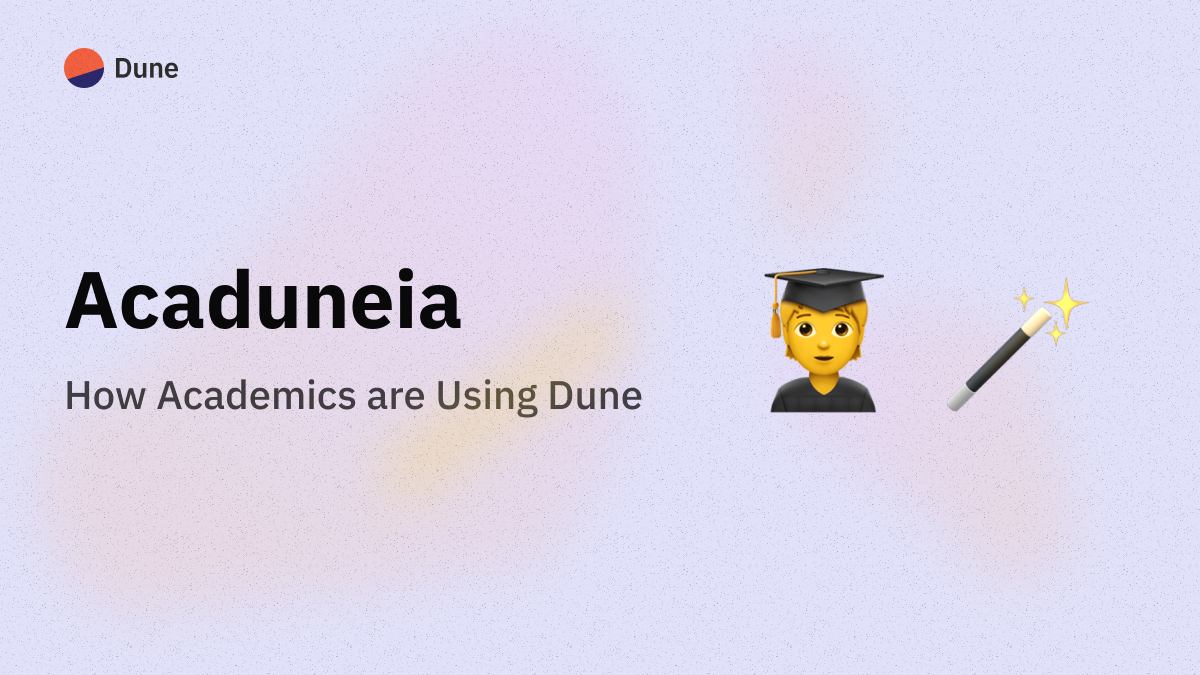 Let’s take a look at what academia has been writing, examine their conclusions, the Dune data they use, and think about how we can expand on their work as a community. 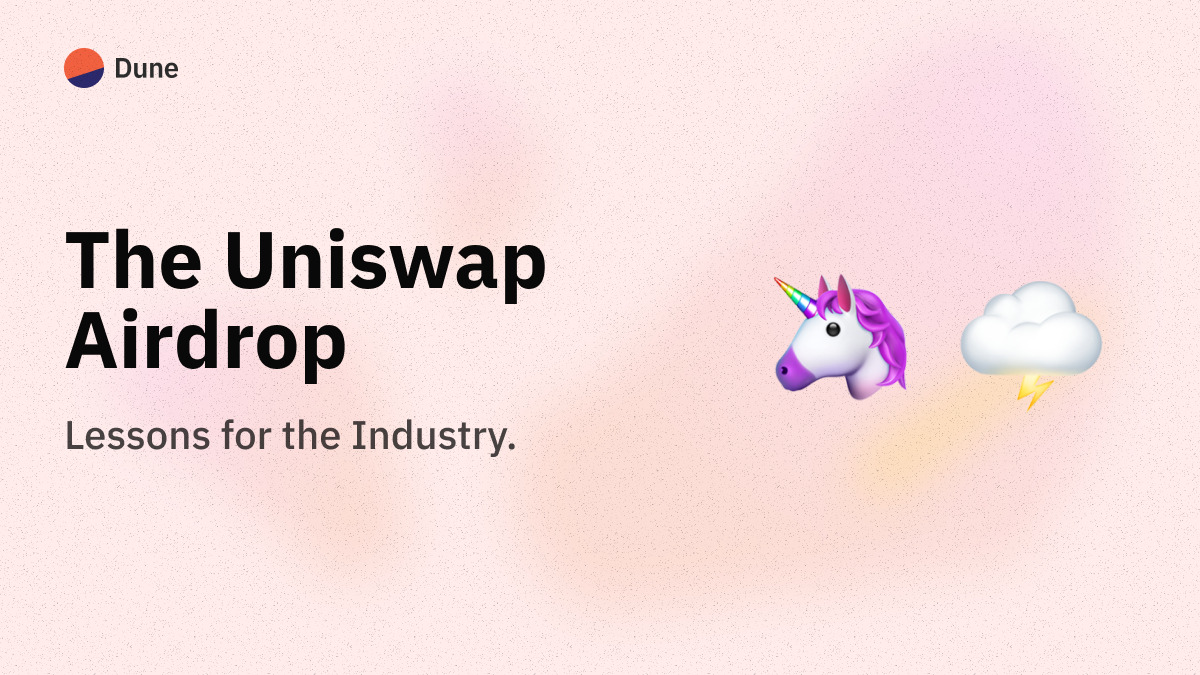 Guide
Updates
Analysis
The Uniswap Airdrop - Lessons for the Industry

The airdrop model seems to be broken - what went wrong? 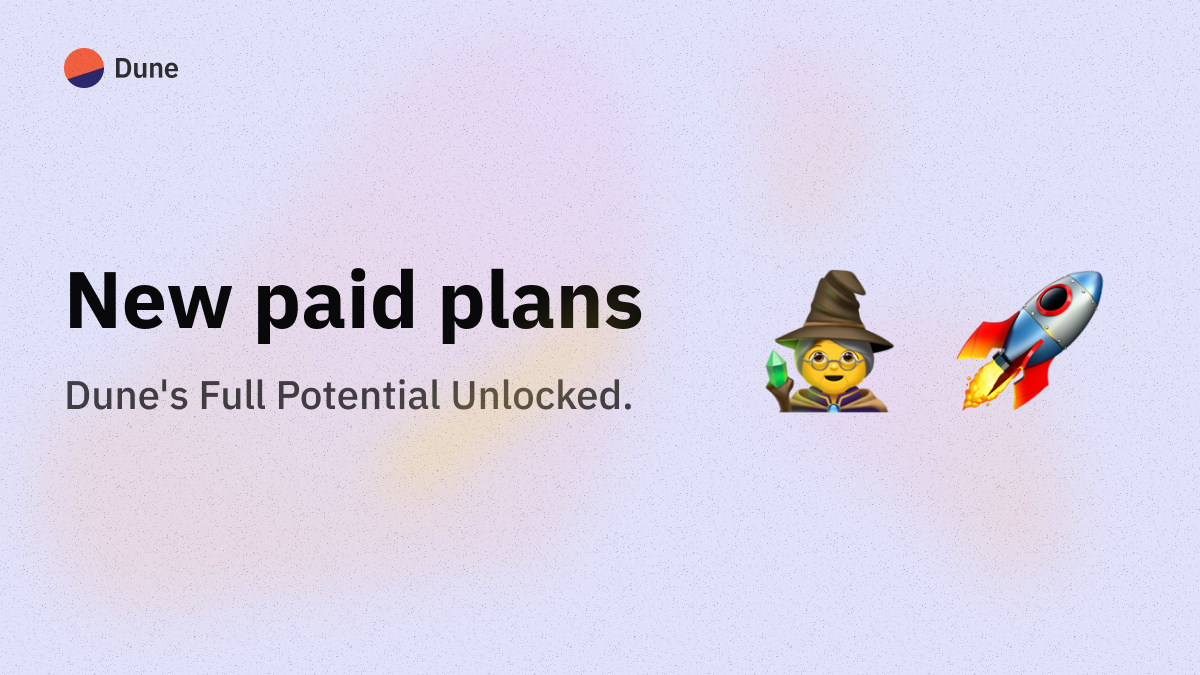 Dune's userbase is evolving, and so is our product & business model